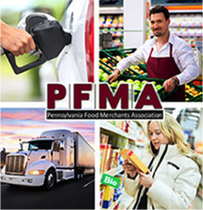 On October 29, 1952, a group of independent retailers met in Erie, PA to discuss common concerns.  During the meeting, the group officially accepted a charter from the National Association of Retail Grocers (NARGUS), and they selected the name Pennsylvania Food Merchants Association. The association operated from Erie, PA and eventually opened a branch office in Harrisburg to maintain closer relationships with the state legislature. In 1986, PFMA consolidated its offices and moved to Harrisburg. Today, PFMA’s office is located in Camp Hill, Pennsylvania, just five minutes from the capitol.

A portion of the profits from PCRS helps fund PFMA programs.
Advanced Search